The coffee cup dilemma and the opportunity for sustainable business

The UK sends an estimated 2.5 billion disposable coffee cups to landfill every year1. This doesn’t include those cups that escape collection and find their way into the surrounding environment along with our other waste products as litter. The detrimental effects, both ecologically and aesthetically of this offshoot of quick consumerism is beginning to grate on the last nerve of our policy makers.

This spotlight can also be attributed to the rising public conscience and the slow dispelling of the myth that coffee cups are recyclable. The recent uptick in sales by companies such as KeepCup1 has shown that millennials are beginning to vote with their paycheques and through this flurry of activity, a new regulatory opportunity is illuminated.

The dilemma of the coffee cup has arisen due to the fact that the typical disposable cup is made from paper plastic laminates (PPL). Along with a cellulose fibre, these also contain a thin internal polyethylene coating. This combination means there are limited recycling opportunities for these cups resulting in them becoming a high profile, problematic waste product2. Although this issue is undoubtedly ubiquitous and troubling, a number of companies within the sustainability space are already creating innovative products and processes to capitalise on this issue including Frugalpac and James Cropper.

Plastic and the environment

So why the interference into consumer behaviour? The invention and proliferation of plastic packaging products has heralded vast societal benefits in the latter part of the 20th century providing employment and durable and versatile consumer products. However, it is becoming increasingly evident to the scientific and medical communities that widespread plastic usage will have consequences to the environment, especially the aquatic system, in the coming decades.

Following the global mega-trends of increased consumption and population from the 1950s to 2012, plastic production rates have increased by 8.7% per year and in 2013, annual production rates neared 300 million tonnes of plastic3. The amount of plastic in the open ocean is estimated to amount to over 250k tonnes comprising over 5 trillion pieces of plastic4. The sources of this influx vary across the globe but cannot be ascribed to one single nation or continent5. As the provenance of plastic waste is so diverse, addressing the problem requires a global agreement with collective enforcement in order to impose robust prevention and clean up strategies with a view to avoiding a global scale tragedy of the commons and the destruction of a vital common pool resource.

One method of prevention arises though government intervention in the form of economic instruments, specifically taxes, such as the 25p tax suggested for disposable coffee cups. Quickly termed the ‘latte levy’ this tax has been suggested by UK MPs such as Labour MP, Mary Creagh1.

As reported by the BBC,1 the latte levy has received mixed reviews from the public. Consumers contest that the cost should be absorbed by the supplier however this would nullify the exercise. The aim of taxation instruments such as this one is to influence consumer behaviour, in this case, to encourage consumers to bring their own cup and prepare the industry for a blanket ban on disposable coffee cups in roughly 5 years’ time. Positive results from this approach have been observed previously in decreased sales of cigarettes and the very similar 5p levy on plastics bags.

The UK has an opportunity here to act as a world leader in this field. Where the UK’s impact is 2.5 billion cups, the United States boasts sending 50 billion cups to landfill every year. Action from the UK could encourage other big consumer nations to follow suit and developing nations to avoid the debacle entirely. The UK could model the technological leap frog required to surpass this issue and transition straight to reusable cups in the take-away food and beverage industry.

How can you help? 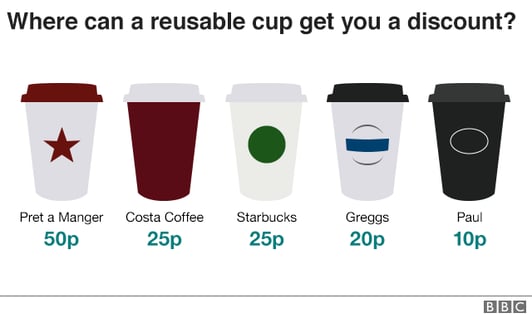 Food for thought – is it time we took a closer look at the coffee industry?