The ABCs of the SDGs: 5 key trends from Climate Week 2016 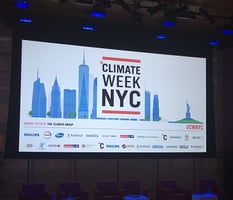 The Climate Group’s Opening Ceremony on Monday 19th September set the stage for almost 100 climate change related events across New York. Coinciding with the UN General Assembly, the week brought together influential global figures from the worlds of business, government and society who are leading the transition to a low carbon economy.

A need for the more widespread use of renewables to tackle climate change from energy was a recurring theme and conversation throughout Climate Week. The Climate Group’s RE100[1] is a global initiative collation of influential businesses committed to 100% renewable electricity in their operations. General Motors recently joined and both Bank of America and Apple announced their commitments onstage during Climate Week. With over 75% of their carbon emissions in their supply chain, Apple’s Lisa Jackson also announced a parallel commitment to work with suppliers on renewable energy. Greenstone’s client Rackspace also announced its commitment to RE100 last week and is working to achieve 100% renewable electricity in its operations.

Change requires strong and focused leaders. Across Climate Week, leading individuals and organisations were present to inspire others and explore collaboration opportunities that global issues like climate change fundamentally require.

The Concordia Summit[2] was an opportunity during Climate Week for thought-leaders to examine the challenges and collaboration opportunities for addressing issues at a global scale. Warren Buffett talked delegates at the event through the origins of the Giving Pledge[3] where billionaires (millionaires need not apply) pledge to give away more than half of their wealth to philanthropy or charitable causes either during their lifetime or in their will. It may have been founded by the Buffetts and Gates of the world but it’s the young, tech-savvy founders of companies like AirBNB and Facebook whose commitments have the potential to inspire the next generations.

Executive Secretary of the UNFCCC, Christiana Figueres’, quote that “Impossible is not a fact, it’s an attitude” resonated across many of the stories recounted at Climate Week. Measurable long-term commitments to reduce emissions, invest in renewables, set targets for diversity and engage suppliers in non-financial reporting were heard throughout the week. And companies leading the pack in their particular areas like Unilever, Walmart, Coca-Cola and Kelloggs are linking these with long-term targets including Science Based Targets and the Sustainable Development Goals (SDGs) to ensure their impacts have longevity.

Many of the issues discussed across Climate Week came to the forefront of discussions when viewed with the supply chain lens. Lisa Jackson from Apple noted that over 75% of the tech giant’s CO₂ emissions are in its supply chain – a common challenge for manufacturers with a globally dispersed supply chain.

Food and agriculture supply chains have been cause for the most urgent discussions on the need for greater supply chain transparency and management. South-East Asian seafood fishing in particular received a spotlight for its dual degradation on the environment and labour practices. The upcoming film, The Ghost Fleet[4] is seeking to give a voice to the forced labour crisis in this sector which amounts of 1 out of every 6 fish being caught by a slave.

The Sustainable Development Goals (SDGS) are a plan for people, planet and prosperity, setting the 2030 agenda for global sustainable development. ‘Business for 2030[5]’ has been set up to help galvanise company action towards meeting the Sustainable Development Goals. During the SDG discussion at the Concordia Summit, much of the conversation centred on how actions towards the goals could be taken within the context of positive financial returns. Multinationals leading on the SDG conversation around the table included Novozymes, Unilever, Coca-Cola and Walmart – citing how they have taken steps to contribute towards particular goals under the SDG framework. The 2015 Mobile Industry Impact Report[6] is also a prime example of how an inherently competitive industry can come together to collaborate on the Sustainable Development Goals. Now that global goals have been defined, it is up to governments and companies to set out the steps they will take in the future to align with contribution towards these objectives.

Looking ahead to COP22

Industry-level collaboration is key to the success of meeting the SDGs and shifting the conversation at the upcoming COP22 in Marrakech from policy to action. Technology, the capital markets and greater inter-business collaboration are three factors that will underpin the success of efforts on achieving future sustainability and were key talking points.