TCFD's recommendations - what you need to know 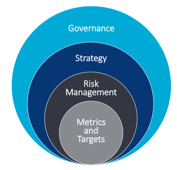 There is a growing concern within the financial community that climate risks and their associated costs are being overlooked when it comes to the pricing of company assets. A survey carried out by HSBC in September of last year highlighted this growing unease, concluding that half of the institutional investors who intended to increase their climate friendly investments felt they lacked adequate information on climate risk.

While in recent years the publication of climate-related information has become more common place, current frameworks give little weight to the financial implications of a changing climate. As efforts mount to keep global warming below the 2°C threshold agreed upon at the 2015 Paris Agreement, industry is faced with two simultaneous challenges. Companies must first discern how the necessary action required to deliver on this target will impact their business, while keeping in mind the increased physical risk warmer temperatures will bring. Such considerations may include market disruptions as a result of the following:

To address these growing concerns, TCFD has structured its recommendations around four key areas that represent the core elements of how companies operate: 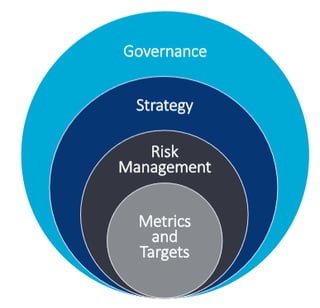 Broadening the scope so as not to focus solely on the impact any organisation has on the environment, this private-sector led framework is supported by key climate-related financial disclosures. These disclosures aim to shed light on the short, medium and long term financial risks and opportunities associated with climate change.

Long-term forecasts invariably contain a great deal of uncertainty, yet their consideration is vital as the financial impacts of climate change will become more significant over time. TCFD recommends assessing potential climate-related impacts using scenario analysis, a process whereby organisations consider how the future may look if various assumptions are met.

Currently there is no single standardised approach, however TCFD encourages making data sets and tools publically available with the hope that over time accepted methodologies will be developed. The inherent uncertainty associated with long-term scenario analysis should not be seen as justification for not performing climate-related forecasts, instead viewed as an opportunity to better prepare for a range of plausible scenarios. Not only does the deliberation of future climate-related risks help alleviate their impact, it can also make clear the financial incentives of transitioning to a low-carbon economy.

To make the financial implications of climate change an integral part of an organisation’s strategy, widespread adoption is crucial. With this is mind TCFD has considered the accessibility of the reporting framework within their recommendations. To avoid being onerous for smaller companies, TCFD established a scenario analysis threshold, which places a greater expectation on larger companies to undertake more robust scenario analysis.

Alignment with other reporting frameworks

Recognising that there is already a large pool of existing frameworks TCFD have, where possible, aligned themselves with other reporting entities. Their recommendations contain significant overlap with widely used frameworks such as GRI, to ease the already time consuming reporting process. This alignment has been reciprocated by CDP, who as of this year will require information on board oversight and climate risk assessment, in line with TCFD recommendations, to attain their coveted ‘A-list’ rating.

The response to TCFD

Such enthusiastic backing from voluntary frameworks is perhaps not unsurprising, but overall the recommendations put forward by the TCFD have been well received by both the public and private sector.  The framework has been officially endorsed by the European Commission and both the UK and French Governments, as well as numerous financial regulators. At the end of 2017, TCFD revealed they had the support of 237 companies, with a total market value $6.3 trillion. This included 150 financial firms that are responsible for assets worth a respectable $81.7 trillion.

While the initial response has been overwhelmingly positive, various consultations have identified improvements that could be made to the framework. The under-development of industry specific 2°C warming scenarios has been criticised and company’s wish for more guidance about their use. TCFD itself recognises this an ongoing process but hope over time widespread usage and increased transparency will lead to improved reporting standards and a greater understanding of the financial systems susceptibility to climate-related risks.

Get the latest industry updates and learn more about TCFD to support your company's reporting here.

Greenstone is a formal supporter of The Task Force on Climate-Related Financial Disclosures (TCFD) and enables its clients to align their reporting with the TCFD recommendations through its software solutions and support services.