The Foundations for Science-Based Net-Zero Target Setting in the Corporate Sector paper has been released by the SBTi. The SBTi, which is made up of representatives from CDP, UN Global Compact, the World Resources Institute (WRI) and WWF, has mobilised more than 990 companies to commit to science-based targets since its formation in 2015.

The setting of 1.5C science-based targets has risen in prominence since the publication of the Intergovernmental Panel on Climate Change’s (IPCC) Special Report, outlining the severe planetary impact of failing to limit global heating to 1.5C.

The IPCC SR15 Special Report warns that the world is already 1C warmer than pre-industrial levels, and that an increase to 2C would significantly worsen the risks of drought, floods, extreme heat and poverty for hundreds of millions of people. The report predicts that if the world can become carbon-neutral by 2047, we will have a 66% chance of meeting the most ambitious end of the Paris Agreement pledge.

CDP’s director of science-based targets and report author Alberto Carrillo Pineda said:  “Net-zero by 2050 is our north star but every second that passes between now and then will determine whether we get there. There is no time to lose. Alongside long-term ambition we need to see aggressive emissions reductions in line with climate science, now, and across all sectors of the global economy. Hundreds of companies around the world are already showing that this is possible and putting their trust in science to build the zero-carbon economy of the future.”

The new paper from the SBTi provides initial clarity on what net-zero targets should entail, with more specific recommendations to follow. The paper notes that net-zero targets must be consistent with the 1.5C trajectory while neutralising the impact of any sources of residual emissions that cannot be eliminated. As such, the SBTi realises the role that offsets will play in net-zero strategies but insists that reducing emissions must be the overarching priority for companies.

Already, 270 companies have made commitments in line with reaching net-zero emissions by 2050 through the SBTi’s Business Ambition for 1.5°C campaign, led by the SBTi in partnership with the UN Global Compact and the We Mean Business coalition.

Greenstone’s sustainability reporting software collects the robust and verifiable data required to inform setting an SBT and its support team provides clients with guidance on committing to and setting SBTs for their organisations. Once set, clients can use Greenstone’s sustainability reporting software to manage and track progress against targets over time. 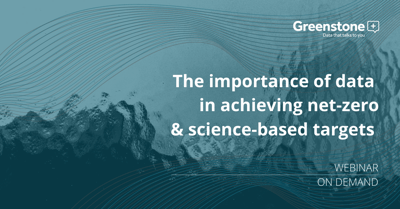