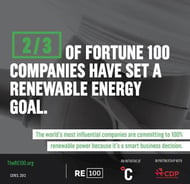 One of the key conclusions drawn from the 2015 Paris Agreement was the need for businesses to shoulder the collective responsibility of tackling climate change. To keep warming below the 2°C threshold, said to alleviate the more catastrophic impacts of global warming, action needs to extend beyond the reaches of government.

With this in mind, over the past few years the Climate Group have introduced a series of ambitious initiatives, working internationally with forward thinking businesses looking to shape the global response to climate change.

Since 2014, in partnership with CDP and under the umbrella of the ‘We Mean Business’ coalition, the Climate Group have implemented three policies that aim to move companies away from fossil fuels and towards alternative sources of energy. The first of these was the RE100, a public commitment by businesses who sign up to source 100% of their electricity from renewable sources by a specified target year. According to the UN’s Intergovernmental Panel on Climate Change, keeping global average temperature rise below 2°C is only attainable if renewable energy is massively scaled up and rapidly implemented. Electricity accounts for 25% of global emissions, and as the population grows and economies develop, this demand is set to increase.

For many businesses, just a few years ago meeting this challenge head on with such a commitment, would have been unfeasible. However renewable energy has now reached a tipping point, whereby switching to 100% renewables is now becoming economically viable. By the end of next year Mars plans to purchase enough renewable energy to power their operations in 11 countries, all of which will be delivered at the same price or lower, than if using fossil fuels. This trend is showing no sign of slowing and within a few years it is predicted two-thirds of all nations will have reached ‘grid-parity’, until only recently an idealised state, in which the cost of alternate energy sources is equal to, or less than, generating electricity from fossil fuels.

The increasing environmental and economic incentives have emboldened businesses and meant the initiative is gaining traction. At launch 13 companies had signed up to the RE100, including the likes of IKEA, Nestlé and Philips, and it has since grown to a total of 112, with 34 companies joining last year alone. The latest figures, displayed in the graph below, show how far these businesses have to go and are good illustration of the wider challenge that needs to be addressed by the private sector. However many members have made investments in renewable energy that have already led to significant progress. In fact companies such as Starbucks and Danske Bank have already reached 100% renewable electricity. 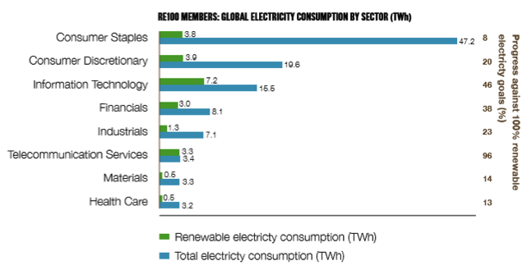 Increasingly members are achieving their targets by purchasing Renewable Energy Certificates, issued for every one MWh of electricity generated solely from renewable sources. Under the new market-based approach to the GHG protocol, a business can report zero emissions for electricity consumption associated with these certificates.

Not content with reducing carbon emissions solely by encouraging businesses to switch to renewable energy, the Climate Group also wants to incentivise organisations to make better use of what they have. Therefore, in 2016 they launched the EP100, a pledge by participants to double their economic output per unit of electricity consumed within the next 25 years. Unlike RE100, which looks to grow the renewable sector, EP100 promotes energy efficiency, by framing it in terms of maximising economic output through increased energy productivity. By reframing ‘efficiency’ in terms of ‘productivity’ the hope is to remove the negative connotations inferred by saving or getting by on less, and instead galvanise businesses to reduce their electricity consumption.

The private sector accounts for half of worldwide energy usage. While there are still barriers that hinder the expansion of renewable energy, such as a lack of supportive policy and inadequate subsidies, businesses have an obligation to take immediate measures to become more energy efficient. According to a recent report by the Energy Transitions Commission, limiting anthropogenic global warming to below 2°C will require a 3% annual improvement in global energy production. This figure is perfectly attainable, as emphasised by the commission, which highlights the large potential for companies to improve productivity with easy to implement climate policies while building their net profits. According to the Alliance to Save Energy, in the U.S alone doubling energy productivity would save $327 billion annually and create 1.3 million jobs.

Still very much in its infancy, the EP100 currently has 12 members, including companies such as H&M and Landsec, who can either aim to double their productivity over a 25 year period from an established baseline, or improve productivity by 2.5% annually. The Climate Group’s aim is that this initiative can work hand-in-hand with the RE100, a hope that has been bolstered by recent studies which conclude that adopting both approaches is the most cost-effective way of decarbonising a business.

Finally, in September of this year, the Climate Group launched their third initiative EV100, which aims to transition businesses from their petrol and diesel fleets to entirely electric vehicles. As the graph below illustrates, globally the number of electric vehicles on the roads has grown exponentially since 2010. While this trend is encouraging it does little to curtail the impact that the transport sector has on global emissions, of which it is now the fastest-growing contributor. Recognising this both the public and private sector are now investing in providing the infrastructure needed to make electric vehicles more accessible; namely increasing the number of charge points. So entrenched is the perception that electric vehicles will run out before reaching a charge point, the phrase ‘Range Anxiety’ was added to the Oxford English Dictionary in 2013.

While this issue persists it’s beginning to feel more soluble. Analysis conducted by Nissan concludes that based on current trends, charge points will actually outnumber traditional petrol stations in the UK by 2020. In London, alone officials have recently announced plans for 1500 new charging points by 2020. Proposals such as these are also being implemented globally, led by China who in just the past year have installed 800,000 new charging points.

The rapid advancement in technology is also making electric vehicles more accessible. Falling battery costs and reduced charging times have eased the burden on consumers. Nissan has installed 4000 new ‘fast chargers’ globally, which deliver 80% charge in just 30 minutes. Not to be outdone Daimler, BMW, Volkswagen and Ford have committed to rolling out 400 public charging points across Europe that will provide 75% charge to a small car in a rather impressive 4 minutes (about the time taken to refuel a car at a conventional petrol station). Such innovations have meant companies such as Volvo can commit to all new cars being electrified after 2019 and given the U.K and French governments the confidence to implement legislation banning the sale of petrol and diesel vehicles beyond 2040, in an attempt to reduce their overall emissions and improve air quality.

The Climate Group recognises the need for progress in this area to be reciprocated by the business world, as they account for half of all registered vehicles. Currently the only policy of its kind, 10 businesses have already signed up to the scheme, committing to a complete switch to electric vehicles by 2030. As well, members are expected to install a battery charging infrastructure to incentivise customers and staff to make the switch. Additionally, timetables are expected to lay out future transitions, sending a strong market signal, which in turn will reduce costs and increase investment into the sector.

As with the previous two Climate Group initiatives, there is also a strong business case for becoming a member. Electric vehicles are cost-effective to run and easier to maintain. The British Vehicle and Rental Leasing Association calculated that per mile charging represents a saving of between 80-90%, compared to petrol and diesel refuelling, depending on where you’re based. This equates to an approximate saving of £100 per 1000 miles which, for larger fleets regularly undertaking long journeys amounts to significant savings. Further encouragement is offered in the form of government grants, where in the UK £4,500 is offered towards the cost of a standard electric vehicle and £500 to a charging point. The hope is that based on the financial and environmental considerations discussed, this latest program will quickly gain momentum.

It is clear that keeping global average warming below the 2°C thresholds will require a large shift in the way companies operate. Despite their recent inception, the hope is that collectively these three initiatives can provide the building blocks for a 21st-century business model.

Currently, the Climate Group is working to integrate the three campaigns, through enhanced profiling and knowledge sharing between its members. As the moral arguments are now being supported by the increasing economic sense of the three campaigns, the hope is that companies will sign up to multiple programs and use the initiatives to lead by example, as the business world looks to adapt to the environmental challenges ahead.

Greenstone and The Climate Group

Greenstone is a proud partner and supporter of The Climate Group. Since 2011, The Climate Group has used Greenstone’s non-financial reporting software to measure, monitor and manage its own carbon impact globally.

The Climate Group chose Greenstone’s web-based application because of its functional breadth and ease of accessibility from anywhere in the world. The software provides fast and accurate reports which enable in-depth analysis of energy, business travel, waste and water across all parts of the organisation.